Players who played for Madrid and Barcelona 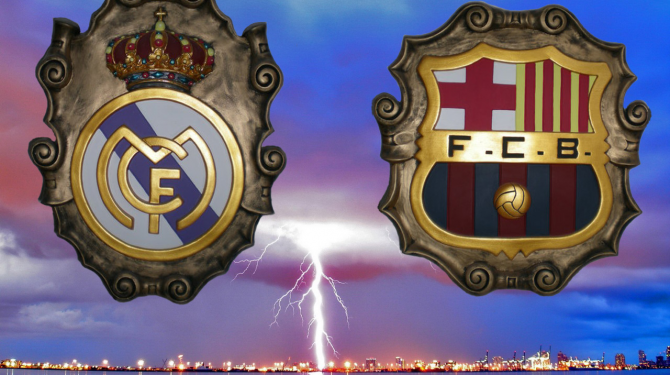 Source:listas.20minutos.es
The sporting rivalry of these soccer teams is, perhaps, the most famous and recognized in the world. A classic that curiously had some players who belonged at some point to the two, a matter that provokes controversy and that can place these players in a real "eye of the hurricane". Do you think it is right that the teams can hire players who belong to their staunch rival?
TOP 15: 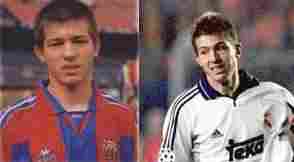 He left the basic forces of Barcelona, ​​to integrate the first team from 1995 to 1999, he went to Celta de Vigo where he played only one season, to then be hired by Real Madrid for the year 2000 where he spent several seasons without much luck, in 2005 happened to Real Zaragoza.
TOP 14: 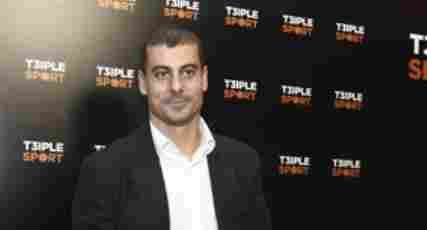 Dani began his football career at Real Madrid B in 1992. He was playing for three years in the Real Madrid branch (with 2 matches with the first team), and in 1995 he was traded with a buyback option to Real Zaragoza. After two years in the club, Real Madrid picked him up to be transferred to RCD Mallorca. The great season of Dani in the Majorcan box did not go unnoticed for the reigning Liga champion, FC Barcelona, ​​which at that time was in celebration of his centenary, and signed him for the figure of 2,500 million pesetas. In his first season in the Catalan team enjoyed the confidence of Louis Van Gaal as shown by their numbers, 11 goals in 27 league games, highlighting as a scorer also in the Copa del Rey and the Champions League. The following seasons the competition in the culé front was very hard, the later incorporations of Alfonso Pérez and Javier Saviola made that each season that passed his importance in the team diminished.
TOP 13: 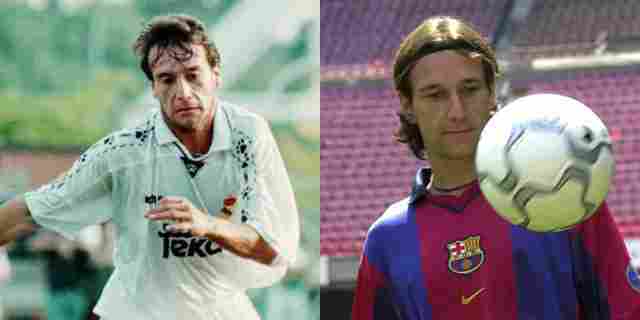 In Alfonso's sports career, two stages stand out. The first is that of his consecration in the 1996-1997 season in which he scores 25 goals in the Spanish League and is the second top scorer behind the Baronista Ronaldo, the second is his rebirth after some irregular seasons, the Eurocopa of Holland-Belgium in the year 2000 it puts him again in the first plane of the soccer panorama and takes it to sign for the FC Barcelona. Alfonso Pérez Muñoz began playing soccer in the lower categories of Real Madrid and, in 1990, he made the leap to the first team. With the white team won Liga (95), Copa del Rey (93) and Supercopa (93), and scored 13 goals. In 1995, Real Betis got his assignment, and the following year, his signing. He scored 25 goals in one of the seasons he spent in the Betic club, and became the Real Betis player who scored the most goals in a single season in all history. He played a total of 152 games in his first five seasons that was in the Verdiblanco team, and scored 57 goals.
TOP 12: 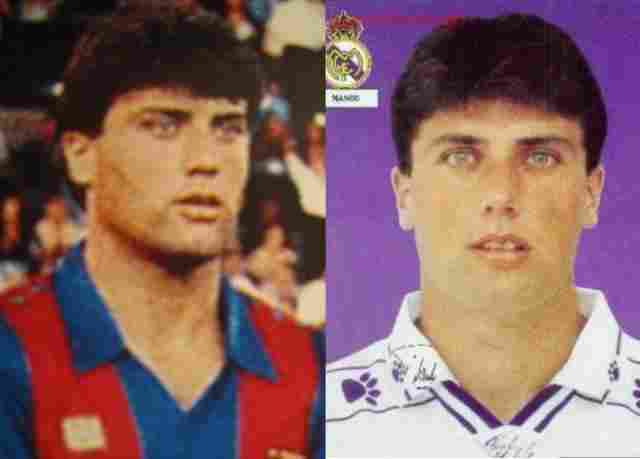 Fernando Muñoz García, sportingly known as Nando (Sevilla, Spain, October 30, 1967) is a retired Spanish footballer. I played as a lateral or central defense. He developed his professional career in Sevilla FC, FC Barcelona, ​​Real Madrid and RCD Español, as well as with Spain. * Suggested by Rafacda
TOP 11: 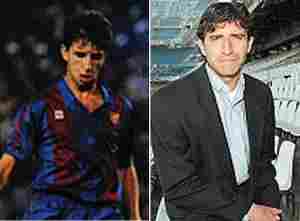 Luis Milla Aspas (Teruel, March 12, 1966), known as Luis Milla, is a Spanish coach and former footballer. Since 2010, he is the Spain Under-21 coach. As a player, he was active in the years 1980 and 1990. He played as an organizing midfielder, being the first of a famous tradition of pivots that have left the quarry of FC Barcelona. He joined the first team from the lower categories in 1988 although he had played 1 match with the first team in the 1984-85 season with 18 years against Real Zaragoza, because due to the strike of professional football players several teams lined up youth to complete their calls. After consolidating in the first team and being summoned to play for Spain, in 1990 he signed for Real Madrid, where he played until 1997. He played the last years of his career for Valencia CF until he retired in 2001. In 12 seasons in First got 7 goals, two with Barca, three with Madrid and two with Valencia. * Suggested by Rafacda
TOP 10: 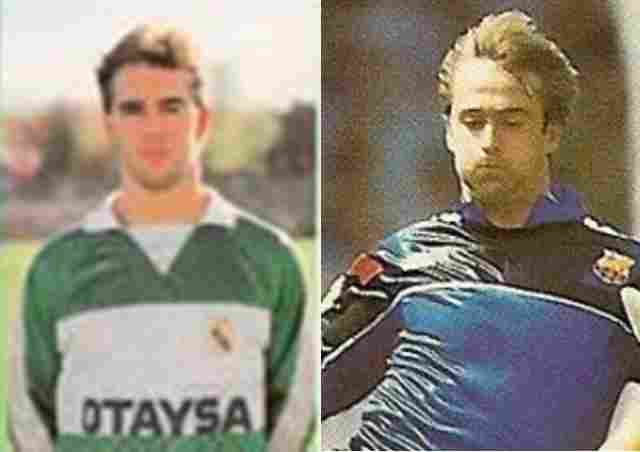 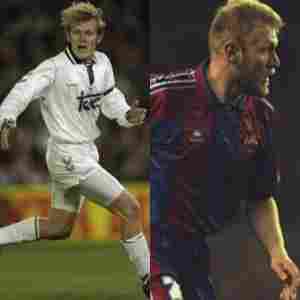 The case of the Croatian played 3 seasons for Real Madrid in the decade of the 90s, decade in which also ficho for Barcelona where he played a single season, the 1995.
TOP 8: 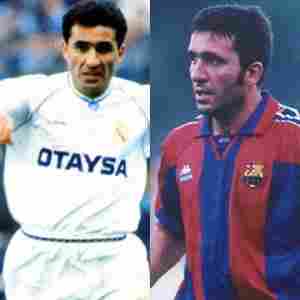 He was signed by Real Madrid in 1990, staying 2 years with Real Madrid, then went to Italy playing for Brescia and back to Spain hired by Barcelona for 2 seasons
TOP 7:

The great German player of great class played for Real Madrid and Barcelona in the decade of the 80's, playing 8 years at FC Barcelona, ​​from 1980 to 1988, moving to Real Madrid where he played 2 seasons from 1989 to 1990. Besides Technical director also directed both clubs.
TOP 6:

The case of Luis Enrique is similar to that of Laudrup, since he played for Real Madrid in 1995, winning the league that same year, although it was in Barcelona where he won the most, winning 2 league championships and 2 Copas del Rey, from 1996 to 2004
TOP 5: 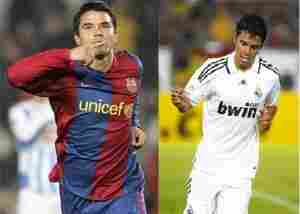 Danish Michael Laudrup, played for Real Madrid in Temparado 95, but what nobody forgot is that he had previously played for Barcelona between 1989 and 1994, and even won 4 leagues with which.
TOP 3: 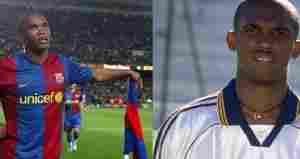 Samuel Etoo arrived in 1998 from Real Madrid, from Inter Milan, but his bad relationships in the team and the few opportunities in the white club made him play very little in the 6 years he was in the club. In 2004 I went to Barcelona for an almost ridiculous amount taking into account the amounts that move for those transpasos and that's where the Cameroonian really shine with its own light, when with the Catalans won three leagues and two Copa del Rey.
TOP 2:

This may be the most controversial case of all, since the Portuguese Luis Figo came to Barcelona in 1995, winning with the club Cule La Liga twice, in addition to getting 2 Copas del Rey, a Super Cup of Spain, a Cup Winners Cup and the European Supercup. In 2000 Florentino Perez in full campaign to be president of Real Madrid, promised the signing of the Portuguese, which few or no one thought possible, is more to the same Figo denied. Already as president Florentino fulfilled his word by signing Figo, who by then became the most hated player for whom. While with Real Madrid the arrival of Figo meant the first piece of "The Galacticos of Real Madrid" with Real Madrid won the number 9 enjoying the success of having won the 2002 Champions League in addition to the 2003 League title .
TOP 1:

The great Brazilian player Ronaldo, came to Barcelona from the PSV of Holland for the season 96-97, in the barcelona get in the season he played a Copa del Rey and a Super Cup in Spain, being a top scorer (champion of scoring of the league) and he won the Golden Ball in 1997. He returned to Spain to join Real Madrid in 2002, after recovering from a tremendous injury and being a champion by playing brilliantly for Brazil in the 2002 Japan World Cup, when he received again the Golden Ball, the same year in which he joined Real Madrid where a year later he finally won the league in 2003, played for Real Madrid until 2007.
More lists
SPORT 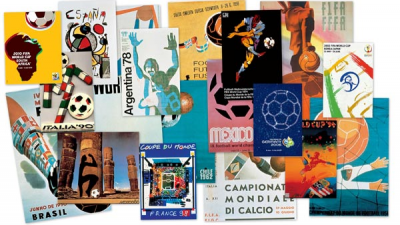 Actors who played characters of the other sex 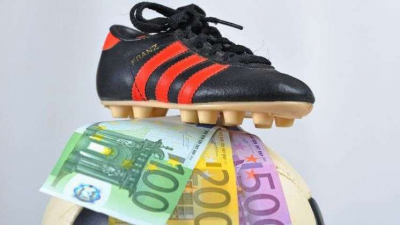 The players who enter more money 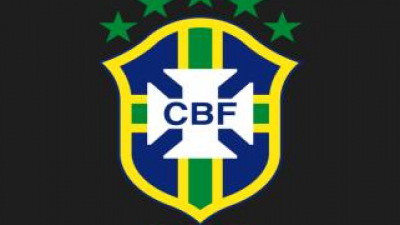 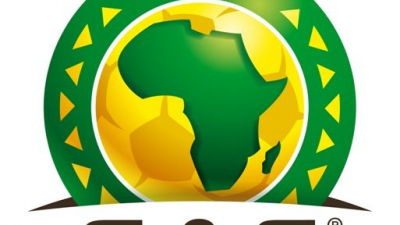 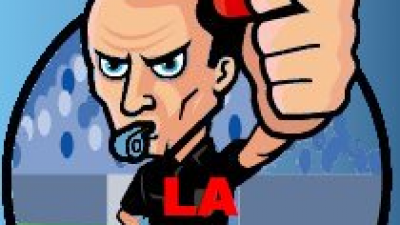 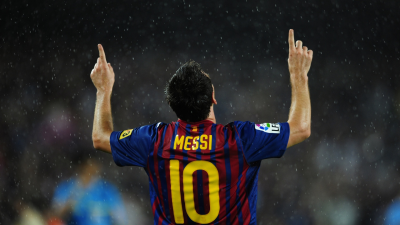 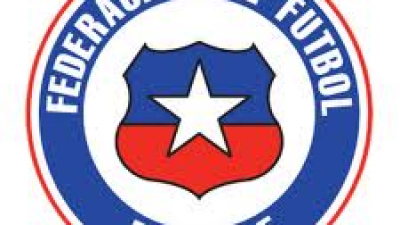 The best Chilean players of all time
SPORT 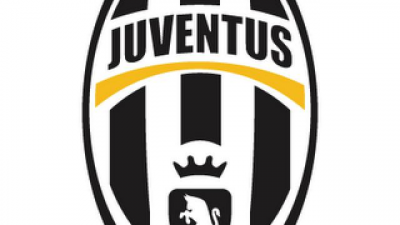 The best players of Juventus
SPORT 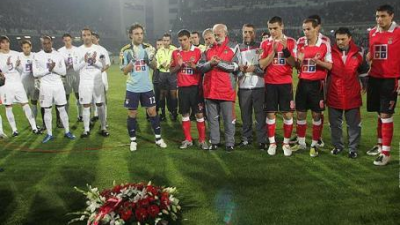 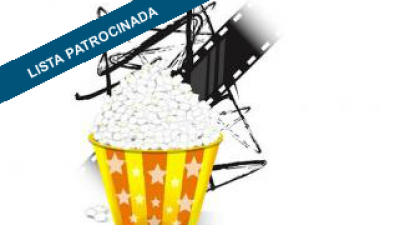 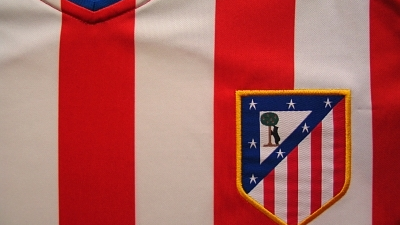 The best players in the history of Atlético de Madrid